This repository contains the Coq formalization type-safety proof of the pDOT calculus that generalizes DOT by Amin et al. (2016). with paths of arbitrary length. This allows us to express path-dependent types of the form x.a.b.A as opposed to just x.A.

To compile the proof, run

This repository formalizes the type-safety proof of the pDOT calculus as presented in our paper. Specifically, it defines the calculus itself (its abstract syntax (paper, Coq), type system (paper, Coq), and operational semantics (paper, Coq)). The Type Soundness Theorem (paper, Coq) proves that well-typed terms in pDOT either diverge (i.e. run forever) or reduce to a normal form, which includes values (functions and objects) or paths. Since the operational semantics does not reduce paths we present an Extended Type Soundness Theorem (paper, Coq) defined in terms of the above reduction relation extended with the lookup operation (paper, Coq) that looks up paths in the runtime environment. This theorem states that a well-typed term either diverges or reduces to a value (which does not include paths).

We include the Sequences library by Xavier Leroy into our development to reason about the reflexive, transitive closure of binary relations.

Correspondence of Lemmas and Theorems

The Coq proof is split up into the following modules:

The following figure shows a dependency graph between the Coq modules: 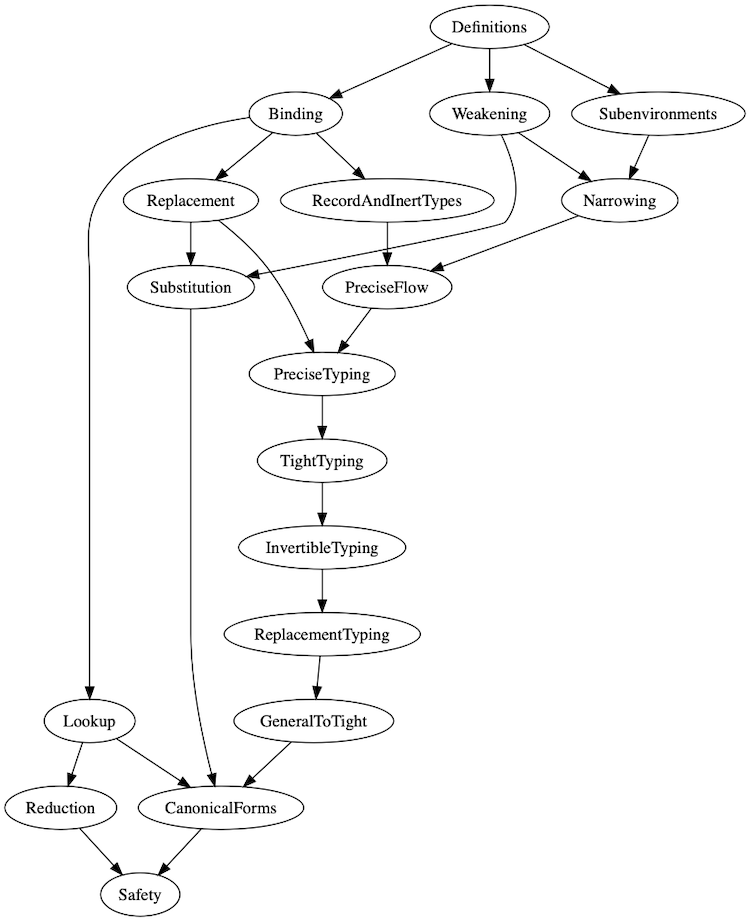